1. Legal Grounds for Foreign Adoptions Carried out by the CA Centre

The Official Announcement by the Minister of Family, Labour and Social Policy of January 13th, 2017 on adoption and custody centres authorised to collaborate with central authorities of other countries or adoption organisations licensed by governments of those countries. (Official Gazette of the Republic of Poland (Monitor Polski). item 35).

The Announcement has been in force since January 17th 2017

We believe the most appropriate milieu for a child to grow up and develop is the child’s own family.

Should it be impossible for the child to be taken care by the child’s own family due to specific circumstances, any and all efforts should be made to place the child in a foster family in the country of the child’s origin.

In case there is no appropriate family in the country of the child’s origin, the child may be adopted by a family residing in another country.

3. Primary Requirements for a Foreign Family Wishing to Adopt a Child

It is customarily accepted and expected that the couple who wish to adopt a child should be married for at least 5 years;

Similarly, the age difference between the child and the child’s prospective parents should not be greater than 40 years (considering the older of the spouses).

The couple should priory obtain a license – qualifying them for an international adoption –  issued by a properly licensed adoption organisation of the country of foster parents’ origin or a relevant government department  (central authority).

The couple has to agree to follow the monitoring procedure carried out by the CA Centre (or by people authorised by the relevant government department), in terms of:

– submitting a report on the child’s performance – once a year – within the first three years after adoption;

– submitting a report on the child’s performance – every three years – till the moment the child turns 18; (becomes an adult in terms of the given country regulations of law).

The couple undertakes to raise the child in the spirit of respect and friendliness towards the country of the child’s origin.

According to the Ministry of Family, Labour and Social Policy, the priority while deciding on foreign adoption is given to:

– Polish community families from abroad;
– families fostering the child with the child’s sibling(s)
– families (blood-)related to the child

The CA Centre accepts and considers only applications submitted through adoption organisations and governmental agencies. Individual applications are neither accepted nor considered.

It means, that anyone who wishes to adopt a child from Poland should first contact one of the authorised by the Polish government adoption organisations operating in their country  or the institution acting as a central authority in their  country  to obtain a license (so called “qualification”) for adopting a child from Poland.

Each and every organisations (enlisted with contact data below) is provided by our Centre with Information Cards pertaining children we seek adoptive parents for. The Child Information Card includes child’s personal data, information on child’s  biological parents, health condition as well as child’s  psycho- and physical development stage.

The foreign adoption organisation then makes an effort to find among those qualified the most suitable couple/family for children specified on the list. – as per the organisation discretion.

Only after the married couple has accepted a child proposed by the organisation, the Qualifying Commission of the CA Centre issues a statement qualifying or not the applicants as prospective parents; should such a  statement is positive –  a consent to meet a child by prospective parents is also issued.

Then, the Centre sends all documents of both prospective parents and of the child to the Ministry of Family, Labour and Social Policy in order to get an official permit to continue the adoption proceeding.

For couples seeking a foster child through a government agency – information about the child suggested is sent to prospective parents’ approval through governmental agencies, after they have obtained a positive initial opinion on qualification.

The final decision is made by the couple after having contacted the child in the premises of the child’s residence.

Should they still wish to become the child’s parents, they submit to the court of law  an adoption application together with all documents required and then, they wait until the period of so called personal contacts with the child is officially granted. This period may last a few weeks – and it is meant for getting to know one another and establishing some bonds.

The proceeding is completed upon the adoption verdict by the Polish Court of Law has been issued. Based on this decision according to Polish Law the candidate couple become legally the parents of the child with any and all parental rights associated therewith.

The verdict comes into force in three weeks from the date of issuing it by the court; new birth certificate is produced and the child is provided with a passport and then, the parents together with their child may leave Poland for their own country.

The entire adoption procedure in Poland usually lasts several months and is connected with two or three visits to Poland .

Before commencing the adoption proceeding the married couple need to gather the documents mentioned below which should be translated into Polish by a sworn translator and certified for their authenticity by means of an Apostille or otherwise.

10  The consent expressed by foster parents to follow the monitoring procedure related to the child ‘post-adoption’ situation implemented by a Polish adoption organisation.

All documents should be updated on the on-going basis; those mentioned in pp. 4, 5, 7, 8 minimum once a year, others – as per relevant requirements.

According to Polish law – adoption organisation seeks for a given child an appropriate foster family in Poland first.

Should such attempts turn out unsuccessful – the child may be qualified officially for an intercountry adoption. In most cases, children with some specific issues qualify for such adoption. The issues may include health problems such as heart disease, neurological disorders, cleft lip and palate, FAS (fetal alcohol syndrome), issues related to developmental retardation, genetic defects and emotional or behavioural disorders.

Quite often those children come from families where there was a mental disease, mental retardation and/or addictions.

Another group of children qualified for an intercountry adoption are children over 10 years old and those who have many siblings.

The Catholic Adoption Centre collaborates with licensed foreign adoption organisations and associations in the field of adoption by foreign applicants those Polish children who, due to various reasons, have not found their foster families in Poland.

We expect the following documents to be submitted by an adoption organisation:

– valid approval by the Ministry of Family, Labour and Social Policy (accreditation),
– a formal rule of an organisation (Bylaws),
– a set of current regulations of law applicable and effective in the country of the organisation’s operations.

The aforementioned documents should be translated by a sworn translator into Polish and certified by the relevant institutions.

The CA Centre does not accept any individual applications. The Centre does not handle any private queries which failed to be submitted through licensed adoption organisations or by a respective government agency.

The Centre has been carrying on its foreign adoption operations since December 10th, 1998.

Since January 17th, 2017, the Centre has been the one and only organisation operating in Poland  which is in fact duly authorised to carry out and mediate intercountry adoption for children from Poland.

By the end of 2017 we managed to place 1924 children with 1230 adoptive families from the USA, Italy, Belgium, Spain, the Netherlands, Sweden, Finland, Norway, Switzerland, Germany, Canada, France and Denmark. 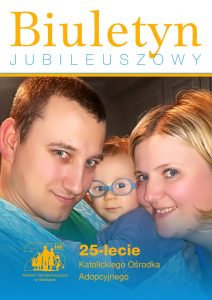 All phone numbers can be found here.

Send us a message